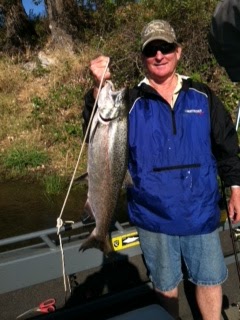 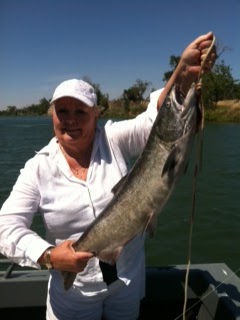 Alan and I looked forward to the opener like a kids anticipates Christmas. We put a big red X through that day on the calendar to ensure neither of us scheduled any work. We listened to all the local outdoor radio shows the two Saturdays before and called experts like Rick Tietz, JD Richey and Kevin Brock to get their advice on where to focus our efforts. In the end, we settled on the Feather and the area around The Outlet!

We worked all day Sunday getting the boat, gear and food ready. Checked the weather report and got to bed early with my cell phone alarm set for 1:00 a.m. At 11:34 p.m., I received a text message from Kevin Brock who was up in Alaska confirming his reports indicated that the most fish seemed to be up on the Feather and to use K-15 or 16 Chartreuse and silver. He ended by sharing he had caught a 70 lb. King a few days earlier! Wow!

We were up and out of the house on schedule and arrived at the entrance to the unimproved boat ramp just north of Gridley near Larking and Lance Roads at 3:45 a.m to get stopped by some other fishermen who got there ahead of us who cautioned us we could not go into the wildlife are until 1 hour before Sunrise without risking a $400. ticket. We decided to heed their kind warning and took our place third in line. Not 5 minutes later a game warden came along and confirmed he was on his way in to start writing tickets for anyone who was already in. Whew!

At 4:52 we started the caravan in with now over 30 vehicles backed up behind us. The launch went amazingly smoothly despite the high water, anxious anglers and the dark. We headed up towards The Outlet and were able to anchor right where we hoped. Within 20 minutes Alan rang out